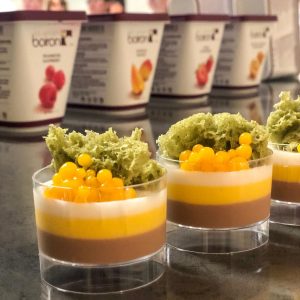 A creation by Michael Laiskonis

Combine the heavy cream and sucrose in a small saucepan; gently heat until sucrose is dissolved.
Combine the cream mixture, the mango purée, and the gelatin. Thoroughly emulsify with an immersion blender.
Transfer the mixture to prepared ‘verrine’ glasses and chill.

Combine milk, cream, and sugar. Bring to a boil.
Remove from heat and whisk in the egg yolks. Add the hydrated gelatin.
Transfer to a container and add the milk chocolate, homogenize with immersion blender, deposit into prepared ‘verrine’ glasses and chill.

Combine the heavy cream and sucrose in a small saucepan; gently heat until sucrose is dissolved.
Combine the cream mixture, the coconut purée, and the gelatin. Thoroughly emulsify with an immersion blender.
Transfer the mixture to prepared ‘verrine’ glasses and chill.

Thoroughly combine all ingredients; pass through a fine mesh sieve.
Transfer the mixture to a one-pint foam siphon and load two gas chargers, per manufacturer’s instructions.
Dispense the mixture into small paper cups, into which a few regularly-spaced holes are punched.
Place in microwave and cook on high power for 30-40 seconds.

Combine the mango purée, sucrose, and lime juice; gently warm to 37˚C/100˚F. Reserve.
Combine the water, agar, and locust bean gum in a small saucepan and bring to a boil; reduce heat and hold a simmer for 2 minutes. Remove from heat and add the mango mixture.
Transfer the warm mango mixture to squeeze bottles and drop into cold vegetable oil (4°C/40°F), allowing 5-10 minutes to fully set. Drain and chill.

Michael Laiskonis was named Creative Director of New York City’s Institute of Culinary Education in 2012. Previously Executive Pastry Chef Le Bernardin for eight years, his pastry philosophy manifests itself in a style of desserts that balance art and science, and contemporary ideas with classic fundamentals. Awarded Outstanding Pastry Chef in 2007 by the James Beard Foundation, his work helped the restaurant maintain three stars from the esteemed Michelin Guide and four stars from the New York Times. In his five years tenure as Pastry Chef at Tribute in Detroit, Pastry Art and Design twice named him one of the “10 Best Pastry Chefs in America”. In 2014, the International Association of Culinary Professionals tapped him as its ‘Culinary Professional of the Year’.